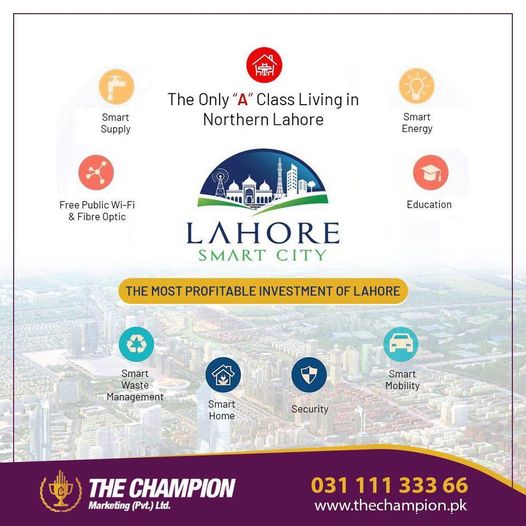 Lahore Smart City is another real estate project with all of life’s modern amenities. For instance, it not just offers an excellent living style to its citizens but also has dedicated technology zones in the form of technology parks to meet all needs of modern life.

Furthermore, its prime location in comparison to other real estate projects has made it the most appealing enterprise for both investors and inhabitants. This venture is the predecessor of the Capital Smart City project.

The success of the Capital Smart City project has made this project the most attractive and potential venture for profitable investment. Its success asses by its speed of development and the interest of investors.

Furthermore, Lahore Smart City meets all legal requirements, making it a lawful real estate enterprise in which to live and engage.

Lahore Smart City is in an Advanced Stage of Development:

Development is critical to any real estate venture’s success and ability to attract significant investment. This development includes a road network for residents and people eager to visit the project site, sewerage and sanitation system, infrastructure for transmission of uninterrupted electricity, shopping places, green belts and parks for leisure time, playgrounds, and security-related infrastructure. Lahore Smart City projects have all these necessities. On the other hand, minor access roads are also in their advancement.

Similarly, homes and villas, which were to be completed by Lahore Smart City developers, are also in the completion stages. Hence, as a whole, this real estate venture is in the advanced stage of development.

Many investors are hesitant to invest in the project because of the massive expansion of illegal housing societies in Lahore and other megacities. Lahore Smart City society has not just met all requirements for legal approval but also attained a certificate from Lahore Development Authorities. In this way, it has become a legal housing project in Lahore to entertain its increasing population and their rising demand for secure homes. Furthermore, this real estate venture has also obtained all necessary no-objection certificates from other authorities. As a result, the Lahore Smart City project is ideal for secure investors and residents.

Lahore Smart City project was developed by one of the most renowned developers in Pakistan. Habib Rafique construction limited is developing this project. Due to its excellence in development, the United Kingdom Business council has awarded it the best developer award.

They have not only shown excellence in their quality of work but also completed each milestone in due time for the satisfaction of investors and all those who build their houses in this venture.